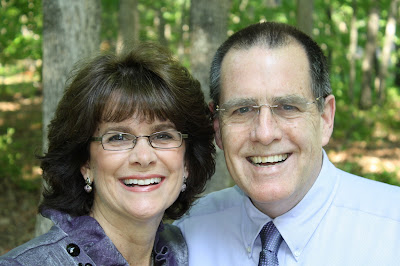 We are the proud parents of three adult children, all three of whom are married, two with children of their own. Tara, a stay-at-home mom, is our oldest, and she is married to Jamie, her high school sweetheart, Professor and President of New Orleans Baptist Theological Seminary and Leavell College. They are the proud parents of not one, but two sets of girl/boy twins; Natalie, Nathan, Samantha and Samuel, and live in New Orleans, LA. It’s wonderful to get your grandchildren in pairs! We were blessed to live less than three miles from Tara and Jamie when the twins were young, and were so grateful to be such a regular part of each others lives for many years before we moved to the NC mountains.

Leah is our middle child, a stay-at-home mom, and graphic designer. She is married to Kyle, her college sweetheart, and Merchandising Director at Lowe's Home Improvement. They are parents to Emery and Will, and live just outside of Charlotte, NC.

Nick, our youngest, graduated from UNC School of Dentistry in May of 2016. He is practicing in Wake Forest, NC and is married to a beautiful young lady, Anne, who also graduated from UNC School of Dentistry (2015), and then furthered her education with a degree in Pediatric Dentistry. She is currently an Associate with Carolina Pediatric Dentistry in Raleigh. We are beyond excited that he met the love of his life and we all enjoyed their gorgeous wedding on December 20, 2014. After EZ's diagnosis in 2010, Nick moved back home from the West Coast and stayed with us for two years, working from home and helping me during our most trying time. They are expecting a little girl in October of 2021.

Linda's mom, Ginny, better known as Gigi, passed away in September of 2020 from lung cancer. She had moved to the beautiful NC mountains to live with Linda, following Ernie’s passing.