Though we enjoyed visiting Grandpa in the hospital... 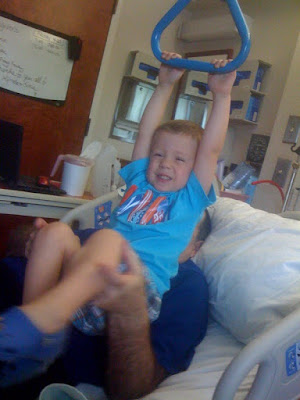 ...we sure are glad to have him HOME! 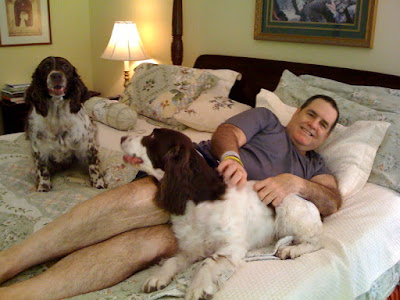 Our family has truly experienced the power of prayer! It was just last Thursday that we posted these prayer requests, and in one week Dad has accomplished more than we could've hoped for: 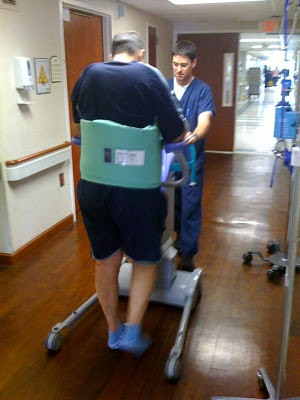 And by Wednesday, Mike had Dad getting up from the bed, walking, and then laying back down all by himself with just a walker! 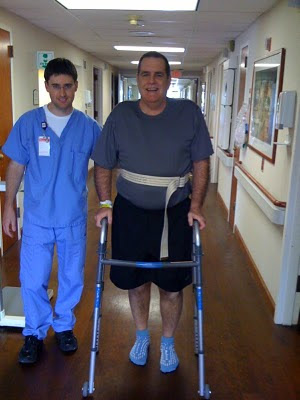 So yesterday, they discharged Dad from the hospital after 31 days! Hallelujah!

Dad will have a Physical Therapist come to the house 3 days a week, but in between those visits he has exercises to do himself. And yesterday I just watched in amazement as he walked down the hallway every hour and then came and stood near the dinner table for supper! There's truly no place like home!

So, from our entire family, we thank you for your prayers. We are experiencing the power of prayer and are humbled beyond words! 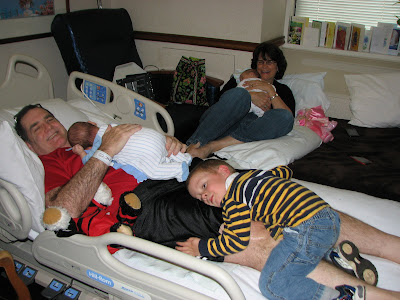 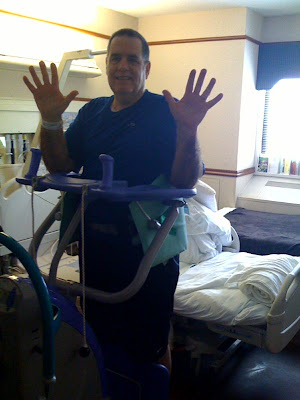 Thank you for all your prayers for our family!!!! Your sweet comments, facebook posts, and emails have meant more than you will ever know for our family. And I can tell you: THE PRAYERS ARE WORKING! Dad worked with Physical Therapy today and was able to stand up for the first time in 27 days! This special machine helped him get through the sitting position and vertical without too much pressure on Dad's sacrum. And Dad said there was absolutely no pain once he was vertical and he was able to put pressure on both his legs and support himself (hence the "See, no hands!" picture above). Please keep praying to our Great Physician for healing and restoration of mobility! We praise Him for this wonderful milestone today!
Posted by Tara No comments:

As many of you know, much has happened in our family since the beginning of 2010. After having considerable back pain last fall and consulting with numerous orthopedic doctors, my Dad went for an MRI on January 4. From that diagnostic test, it was determined that my Dad had "abnormal cells" near his tailbone and underwent a needle biopsy (click here for that post) to find out specifically what they were. The abnormal cells were diagnosed as a plasmacytoma (click here for that post), a collection of rapidly dividing plasma cells that attacked his sacrum. For all of us who are not up on our anatomy, here is a picture of what a normal sacrum (the blue area) looks like: 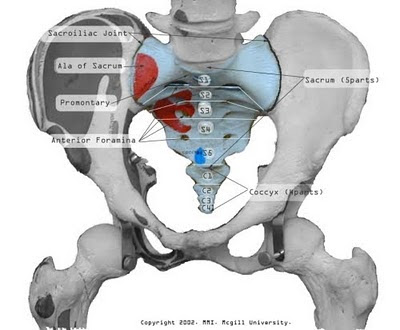 By the time we discovered the mass in my Dad's sacrum, it had probably been there for at least a year. It was only when the intense back and leg pain began occuring that we realized this mass was present and it had already done considerable damage to his sacrum bone (with some doctors estimating the damage up to 50%). The sacrum is the "root hub" for the nerves of the lower half of your body. (There are 4 holes on either side of the sacrum where all the nerves for your legs run through.) It has also been described as the "cornerstone" for your spine and pelvis.

Dad went through several other medical tests (x-rays, urine tests, and blood screenings) at the end of January to determine if this sacral plasmacytoma was the only location of cancer in his body. (Since this is a blood cancer, it is very rare that it only occurs in one spot.) Following these tests, it was determined that there were also "lesions" on his skull, left femur, and humeri (upper arm bones), and he was diagnosed with Multiple Myeloma.

A sweet church member had recommended her oncologist to Mom and Dad before we ever found out it was cancer. And it was only through God's provision that we were paired up with him immediately! He is a nationally-renowned oncologist by the name of Dr. Alan Kritz. He specializes in blood cancers and we couldn't be more grateful that he is right here in Raleigh:

Dr. Kritz began treatment immediately. Dad underwent 12 radiation treatments over the course of 3 week time period to begin shrinking the tumor in his sacrum. In addition, he had a portacath put in and began chemotherapy (which will last a total of 4-6 months). Dr. Kritz's "chemo concoction" consists of 3 chemicals which have just recently made great advances in multiple myeloma treatment: Velcade, Thalidomide, and Decadron (steroid). He also gets Aredia (bone strengthener) once a month. Besides being tired and slightly nauseas, Dad has not had any serious adverse reactions to the radiation or chemo- Praise the Lord!
During the month of February, Dad was tired but felt great! The pain was lessening, his blood counts were looking good, and Dr. Kritz was thrilled with his progress. I am so thankful that Dad felt so good during the birth of Samuel and Samantha, and was able to come visit me at the hospital everyday.
On March 6, Dad took a misstep going to church. He felt a sharp pain and within an hour was unable to bear weight on his left leg. He began using crutches, but over the course of the next 2 1/2 weeks, Dad had more and more pain as he tried to sit or walk.
On March 29, we made the decision to transport Dad to Rex, where doctors could come to him and treat his pain. By this point, it was absolutely excruciating for him to sit or stand. He met with a neurosurgeon, a neurologist, and a doctor from the pain clinic. They tried putting in a "pain pump," which administered pain medicine directly to Dad's sacrum, but unfortunately, it did not provide any more relief than oral medications. In addition, they have done CT scans, more MRI's and x-rays of his sacrum. The tumor has shrunk (praise the Lord!), but as it decreases, it leaves a void in the sacral bone. Therefore his sacrum is "unstable" and the weight of his upper body is not supported when he tries to sit or stand, pinching the nerves to his legs and causing incredible pain.
It has now been 3 1/2 weeks, and my Dad is still in the hospital. When he is laying down, there is absolutely no pain. However, when he "bends" to sit, it is unbearable due to the pain. Dr. Kritz has started him on 2 more weeks of radiation and Dad is continuing with his chemo while in the hospital. Last week, we did receive some good news: the overall myeloma in his body is greatly decreased...up to 90% gone! (Dad's M-spike was a 2.4 in January, and now it is a 0!) Though this "mechanical problem" of pain in his sacrum is frustrating, we are so grateful that the overall cancer is really responding and is greatly diminished!

Please pray specifically for these things:

On top of this medical trial, my Dad was terminated from his job just 2 days after finding out the results of the MRI. Our family has had to make some incredibly hard decisions since then, but have determined that it is best for my Mom and Dad to sell their home and move in with my Grandma. (I will miss having my Mom and Dad as my next door neighbors, but my Grandma only lives 5 minutes away and has a mortgage-free home with room for everyone!) Please pray for these financial requests as well:

It is in these trials of life that you realize just how little the materialistic things matter. We are so grateful for our family, and this journey has further strengthened our bond and draw us closer together. And it is by faith that we cling to Christ, as He is more important to us than everything else.

I'll leave you with one final verse that has given us great encouragement: “Therefore humble yourselves under the mighty hand of God, that He may exalt you in due time, casting all your care upon Him, for He cares for you. Be sober, be vigilant; because your adversary the devil walks about like a roaring lion, seeking whom he may devour. Resist him, steadfast in the faith, knowing that the same sufferings are experienced by your brotherhood in the world. But may the God of all grace, who called us to His eternal glory by Christ Jesus, after you have suffered a while, perfect, establish, strengthen, and settle you. To Him be the glory and the dominion forever and ever.” (1 Peter 5:6-11)